Tinder is Allowing Users to Send Bitmoji in Messages 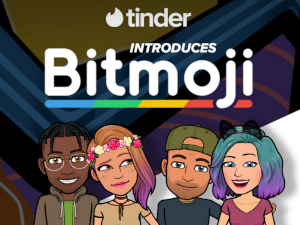 Tinder has announced that users will be able to add Bitmoji when messaging matches.

The popular dating app is utilizing the personalized-avatar service Bitmoji to help users be a little more creative and expressive when they communicate and share with their matches. Previously, Tinder did not allow users to send any images in messages to other matches because of potential abuse and sensitive content (a.k.a. “dick pics”). Users had to rely on curated photos (up to nine total per profile) to express their personalities and preferences, which many people felt was insufficient for something as personal as online dating.

Adding Bitmoji cartoons and caricatures allows users to be creative and express themselves to matches without worrying about the potential problems of sharing photos.

As an article in Slate pointed out, “there’s no chance of any impropriety with the cartoons—Bitmojis can be saucy or silly, but they are never graphic.”

The use of Bitmoji is made possible through integration with Snap Chat, so Tinder users have to connect to the service through their Snap Chat accounts. However, users won’t be able to see each other’s Snap Chat handles via Tinder, only the Bitmoji, so users can keep the two separate. (Note: Bitmoji’s parent company is Snap Inc.)

How to use Bitmoji on Tinder.
Image: Tinder

This announcement comes on the heels of another new Tinder feature that will be rolled out worldwide – looping gifs. The new feature dubbed “Loops” allows users to take two-second videos and add them to their profiles, which will appear as looping GIFs. Tinder tested it in select markets and saw that Loops inspired longer conversations and increased profile likes. The idea behind Loops is the same as adding Bitmoji - when users can get a better idea of who their matches are via features that creatively reveal personality, they are more likely to be interested and engage in a conversation.

As Tinder stated in a blog post[*1] : “We know it’s not always easy to express yourself with just words. That’s why we’ve taken the necessary steps to let you be you, because being witty, fun, and cute shouldn’t be a full time job — now you can send your own personal avatar on Tinder. And trust us, a Bitmoji is worth a thousand words.”

Currently, only users in Canada and Mexico have the ability to use Bitmoji in Tinder, although the company is expected to roll out the new feature in the U.S. by the end of summer, according to website Engadget. A global rollout is expected to come after assessing response from these test markets, but no date is set.

For more information on this dating service, read our review of the Tinder app.