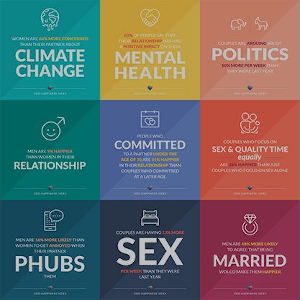 Sex. Politics. Equality. Mental health. Climate change. Commitment. These are the things on couples’ minds in 2020, according to eHarmony’s third annual installment[*1] of "The Happiness Index: Love and Relationships in America."

Eight-two percent of American couples say they’re happy in their current romantic relationships (down just slightly from last year’s 83%). Although there’s no exact science to creating a satisfying partnership, surveys like these offer insight into what makes successful couples thrive. Two factors at the top of the list are sex and quality time.

In a tumultuous election year, it’s no surprise that politics and social issues are on everyone’s minds. Couples in 2020 are significantly more likely than couples in 2019 to argue about politics at least once per week. Their biggest concerns include economic crisis (15 percent), climate change (19 percent) and terrorism (29 percent). Women are more likely than men to be concerned about climate change and terrorism, while men are more concerned about an economic crisis and epidemics.

Those were not the only divides the 2020 Happiness Index discovered along gender lines. The survey found that, perhaps contrary to dated stereotypes, men are 9 percent happier than women in their relationships. Although men are more likely than women to believe that being in love is more important than being married (70 percent vs. 64 percent), they are also more likely than women to believe that being married has made or would make their relationship happier (68 percent vs. 46 percent). Seventy-three percent of men want to spend the rest of their lives together with their partners, which is up from last year’s 67 percent.

“As champions of love, we are thrilled to report that couples are taking time to focus on their relationship through actions like the quality time they spend together, sexual intimacy and viewing one another as equals,” said Gareth Mandel, COO of eHarmony, in a press release. “We’re also tracking new trends for couples of all ages, especially Millennials and Gen Z, regarding love, commitment, cultural concerns and happiness as these generations have grown up in the digital age where online dating has been omnipresent.”

"The Happiness Index: Love and Relationships in America" 2020 report was commissioned by eHarmony and conducted by Harris Interactive. Over 2,390 participants who were aged 21+ and married, cohabiting or in a long-term relationship took part. Results were weighted to be nationally representative by age, gender and region.

For more on this dating service you can check our our eHarmony app and site review.