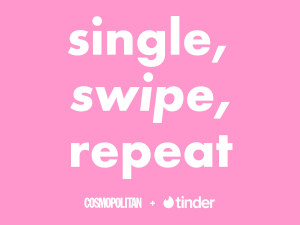 Single life is full of ups and downs, and while the dramatic moments are not always fun to live through, they make for great entertainment. Tinder has partnered with women’s lifestyle magazine Cosmopolitan to create a branded podcast that digs into what dating is really like across the United States.

‘Single, Swipe, Repeat’ is a 12-episode audio show hosted by Faye Brennan, Sex & Relationships Director of Cosmopolitan. Brennan is joined each week by a celebrity guest host to break down the most memorable, hilarious, emotional, romantic and relatable dating stories shared by Tinder users throughout the country.

“Between us here at Cosmo, and our friends over at Tinder, we’ve heard tons of wild dating stories lately and they’re just too good not to share,” Brennan says in a promotional clip. “Jetting off to The Bahamas after the first date? Booking six dates back-to-back in the same night? We’ll get into it all with singles living everywhere from Sin City to South Carolina on ‘Single, Swipe, Repeat.’”

Five episodes have been released so far, each approximately 20 minutes long:

Tinder is not the first dating company to test the podcasting waters. Bumble released the first season of its own dating podcast, Unsubscribe[*1] , earlier this year. Unsubscribe is hosted by Jada Sezer, mental health and body positive activist, and Louise Troen, International VP Marketing and Communications for Bumble.

'Single, Swipe, Repeat’ is available on all major podcast providers, including Apple Podcasts[*2] , Google Play[*3] , Spotify[*4] and Stitcher[*5] . New episodes will be available every Tuesday in July.