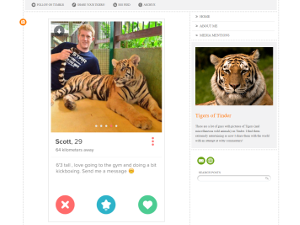 The guys-posing-with-tigers-on-Tinder trope isn't just a played out profile pic, it's a global phenomenon that’s inspired Tumblr[*1] , blogs[*2] , think pieces[*3] , and a scolding letter[*4] from PETA. It may now be coming to an end.

To honor International Tiger Day on July 29, Tinder announced it’s taking a stand against photos taken with tigers and other wild animals.

“While most of us are on Tinder to find a soulmate or a date, appearing on the app isn't fun for everyone,” reads PETA’s original letter. “What might, at first swipe, look like a harmless picture actually means that someone was caged, dominated, and tied down or drugged before their photo was taken and uploaded online. If this happened to one of your users on a Tinder date, you'd block the profile of the person responsible immediately. Unfortunately, this is the reality for tigers, lions, and other big cats who are featured in an alarming number of Tinder profile photos.”

Tigers and other wild animals used in tourist attractions are frequently exposed to extreme stress and physical abuse. They are often removed from their mothers at excessively young ages, sometimes within hours or days of birth so they can “get used to” behind handled by people. Trainers then their “break their spirits” by beating them into submission so they’ll perform on cue.

Once they become larger and more dangerous, the animals are typically locked in warehouses where they’re neglected, or heavily sedated so they don’t pose a threat to snap-happy visitors. It doesn’t always end well[*5] . And because the window of profitability is so short, breeders constantly churn out babies so that they always have an “inventory” of cubs available.

We can all agree: animal cruelty is a poor way to impress a potential match.

Tinder responded to PETA’s request to “take the stripes out of swipes” with a letter of its own. In a blog post[*6] , the dating app asked users to remove their tiger selfies, writing that “posing next to a king of the jungle doesn’t make you one.” Tinder also pledged to donate $10,000 to Project Cat in honor of International Tiger Day, and offered users other ways to show they care about the environment and its wild inhabitants:

Users are encouraged to tag any friends with tiger photos and join the conversation on social media with the hashtag #NoTigerSelfies.