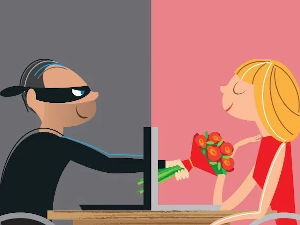 You swipe right on someone special on a dating app. You start communicating, and soon they want to move the conversation off the app to email or phone calls. The relationship progresses. You can feel yourself falling for them. They tell you they love you. But they live far away — as close as you think you’ve become, you’ve never actually met in person.

Then they ask you for money. They say it’s for a family emergency. Or an unexpected medical expense. Or a plane ticket to finally visit you. Their scam is almost complete.

Millions of men and women turn to online dating services to meet someone. But instead of finding the love of their life, many find a scammer trying to dupe them out of money. In 2018, people reported losing $143 million to romance scams — a higher total than for any other type of scam reported to the FTC’s Consumer Sentinel Network, an online database of millions of consumer complaints.

Reports like these are on the rise. Sentinel received more than 21,000 reports about romance scams in 2018. The median individual loss to a romance scam reported in that year was $2,600, about seven times higher than the median loss across all other fraud types. For people over 70, the median loss jumped to $10,000. By comparison, in 2015, Sentinel received 8,500 complaints and reported dollar losses totaled $33 million.

Romance scammers lure unsuspecting singles with phony dating profiles, often stealing photos from the web or assuming the identities of real people to make their deception harder to detect. Scammers use similar tactics on social networking sites. Once a fraudster has successfully baited a victim, they make an excuse for why the relationship cannot move offline. The FTC reports that scammers commonly lie about being in the military, being a doctor traveling with an international organization, and working on an oil rig.

Eventually, the ruse culminates in the scammer asking for money. According to the FTC, scammers often claim they need financial assistance to:

The majority of romance scam victims said they wired money to their scammers. The next largest group said they sent money using gift cards or reloadable debit cards like MoneyPak. Other victims said they mailed cards or gave the scammer their own debit or credit card information. Con artists prefer these payment methods because they offer quick access to cash, the transactions are largely irreversible, and they can remain anonymous.

If you encounter a suspicious profile or message, report it to the dating service or social media site. Then, alert the FTC through the Complaint Assistant[*1] .

Dating Sites Reviews - Romance Scams Con People Out Of More Money Than Any Other Type of Consumer Fraud
https://www.datingsitesreviews.com/article.php?story=romance-scams-con-people-out-of-more-money-than-any-other-type-of-consumer-fraud