Plus-Sized Daters Are Inspired by Body Positivity Movement, According to Dating App WooPlus 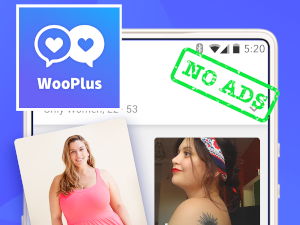 Plus-sized daters are feeling more positive about finding love with dating apps, according to a new study by dating app WooPlus.

The company conducted a survey of its 3 million users to find out what they think of the body positivity movement, which has become extremely popular thanks to outspoken stars like Lizzo, Ashley Graham and Tess Holiday, who have brought attention to the cause. These celebrities have been instrumental in shining a light on the problem of fat-shaming by encouraging people to embrace their curves and recognize their own beauty in all aspects of their lives – including their love lives.

According to the WooPlus poll, 78 percent of its users have become more inspired to be confident in their own skin and to use a dating app to find love, thanks to the body positive movement.

Dating apps have traditionally been a mixed bag for plus-sized daters, many of whom have been fat-shamed or fetishized on traditional dating apps. However, things seem to be changing for the better according to WooPlus users.

WooPlus describes itself as “a friendly and inclusive dating app for curvy people and their admirers, where curvy singles feel embraced and confident in enjoying dating and finding love.” And with users from countries around the world, it has grown to be the most popular dating app for curvy people. Google Plus also featured the app on its platform this year, highlighting its mission of diversity and inclusion.

In their survey, WooPlus found the overwhelming majority of its users (83 percent) credit the body positive movement as a benefit to their community and their daily life. Over 68 percent said they’ve been inspired and encouraged to overcome self-doubt and be more confident in “every aspect of life.”

While 43 percent of users admitted that insecurity and low self-esteem about body size used to be big hurdles in their relationships, 55 percent believe there is less stigma in embracing diverse body types than there was ten years ago.

WooPlus Founder and CEO Neil Raman said in a statement[*1] : “From day one, we have focused on offering the best dating experience and creating a friendly inclusive community for curvy girls. We have received countless stories from our members sharing how WooPlus has brought them love and confidence. This continuous positive feedback has created a significant impact on our team while also reaffirming our founding purpose and mission to help everybody find love.”

The survey was conducted online from April through June and includes responses from users in the US, UK, Canada and Australia.