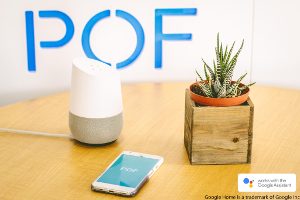 Stop us if you’ve heard this one before. A dating app is teaming up with a voice-activated digital assistant to help tech-savvy singles find love hands-free.

Earlier this month, eHarmony announced a partnership with Amazon to bring a branded skill to Alexa. Enabling it allows eHarmony users to hear their matches and messages by voice, ask for more details about their dating prospects, and have photos of their connections sent to their smartphones.

This time around, it’s not eHarmony or Alexa that’s in the news. Plenty Of Fish has announced an integration with the Google Assistant on Google Home, as well as eligible Android and iOS phones. Same premise, different devices.

The goal is to make the communication process easier by allowing a user to speak rather than type. The potential benefit is twofold: first, it frees up the user’s hands for multitasking, and second, it encourages an unaffected conversation more in line with how the user naturally speaks.

The union between the dating service and Google comes on the heels of POF's launch of Spark, an in-app feature that helps users quickly and casually initiate more meaningful conversations. POF has reportedly seen a nearly 25 percent increase in replies on Android and nearly 40 percent on iOS devices since launching Spark.

"The online dating category has seen few tech disruptions in recent years, so our goal is to really listen to our users' needs and habits, and innovate accordingly to make dating easier and true connections more meaningful," said Hesam Hosseini, CEO, Plenty of Fish. "We've found that a good conversation is the number one indicator of a great date, so both Spark and the Google Assistant integration were created to help people easily connect and get the conversation started."

With two major dating services announcing similar home assistant integration in the same month, we have to wonder if this is the future of falling in love. Perhaps someday we’ll all be dictating sappy sonnets to robots while doing the dishes or scrubbing up in the shower. Just make sure you don’t fall for the device itself, a la Joaquin Phoenix in Spike Jonze's Her.

For more information on this dating service you can read our review of Plenty of Fish.