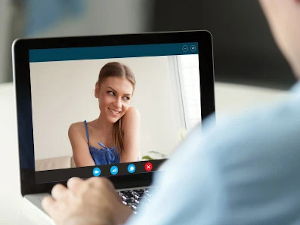 As the coronavirus becomes pandemic, OkCupid users are choosing to search for love and keep on dating.

According to Yahoo Finance[*1] , a whopping 92 percent of American OkCupid users said they are willing to date during the coronavirus outbreak. Overall, 88 percent of users across the globe are willing to date at this time. OkCupid also noticed a 7 percent increase of conversations between users in the first week of March, according to an internal questionnaire the company sent to its users.

It’s important to note, as Yahoo Finance pointed out, that it wasn’t clear in the questionnaire if “going on dates” meant in-person or virtually over an app, through Facetime, Skype, Zoom, or other web-based means. That could be an important distinction. Dating.com surveyed singles during the pandemic and found that as many as 82 percent were turning to dating apps to meet people and go on virtual (online) dates.

More American OkCupid users are willing to meet new people over the app so that they don’t have to sacrifice their love lives – significantly more than Indian users (74 percent), and definitely more than Italian users (45 percent). Canadian and Australian users feel similar to Americans - 92 percent of them are willing to date right now. However, the UK, Germany and France have more OkCupid users willing to go on dates with other users - 93, 95 and 94 percent respectively.

OkCupid daters are aware of the virus and the increased risks, according to Yahoo Finance. Talk about the virus over the app increased 188 percent between January and February. This might also be because the app has offered some virus-related prompts to get people talking, including the two most popular: "I spend a lot of my time thinking about" and "My favorite conspiracy theory," according to OkCupid.

The U.S. cities that have the most respondents willing to date during the pandemic include Denver, Chicago, Oklahoma City, New Orleans, Phoenix, Austin, Boston, Los Angeles, Washington D.C., Atlanta, Houston, Louisville, and Nashville.

Tinder is taking a different approach from OkCupid, providing “ads” to its users that link to the CDC website to remind them about taking precautions like washing their hands and social distancing. Both apps are owned by Match Group.

OkCupid has not offered similar notices or precautions to its users, though conversations about the virus continue to remain a popular topic for discussion on the app.