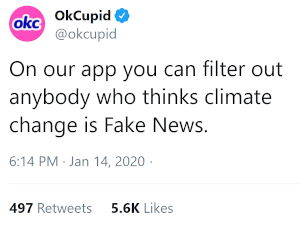 Bonding with a date over shared interests is nothing new. Neither is weeding out potential dates who don’t share your values. In a time when it is growing increasingly difficult for people to date across political lines, OkCupid is making it easier for singles to meet matches who share their views — at least when it comes to climate change.

An overwhelming majority of OkCupid users think climate change is one of the most devastating threats currently facing the planet. According to data provided by the company, 97 percent of its users believe climate change is real and 82 percent say they’re concerned about its potential impact. More than 90 percent also said they’d be willing to change their behavior if they found out something they do is bad for the environment. OkCupid says it has seen a 240 percent increase in mentions of related terms appearing on people’s profiles, including “climate change,” “environment,” “global warming” and “Greta Thunberg.”

With so many users expressing unease about the future of the planet, OkCupid has introduced a feature that allows users to filter climate change deniers out of their matches. The platform’s set of 4,500 questions users can display on their profile to assess compatibility with potential mates now includes questions about the environment. OkCupid global communications manager Michael Kaye says the climate change questions have already received more than 4 million answers since they were announced in mid-January.

OkCupid’s algorithm calculates match percentages based on the multiple choice questions users answer about the things that matter to them. Users also have the opportunity to indicate how much a particular subject matters to them and what answers they’re willing to accept from potential suitors.

This is not OkCupid’s first time getting involved in pressing political and social issues. The system already included questions on hot button topics like gun control, marriage equality and political affiliations, as well as regional subjects like Brexit for daters in the UK. Kaye says users can anticipate more questions about contentious issues in the near future.

“OkCupid is the only dating app where people can match based on shared disapproval of — or support for — Donald Trump, and many other important issues of today,” he told Digital Trends[*2] . Now that we’re in an election year, our daters can expect new questions throughout the campaign.”

For more on this dating service you can read our OkCupid reviews.