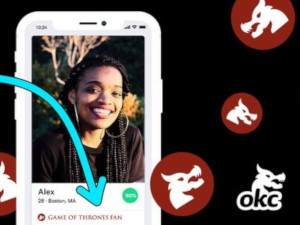 HBO is set to air the eighth and final season Game of Thrones this month. For the show’s devoted viewers, it will be sad to say goodbye, but OkCupid is making sure fans won’t have to suffer alone. Users who publicly answer “yes” to the question “Do you watch Game of Thrones?” will now receive a profile badge prominently declaring their love for the series.

OkCupid predicts the badge will lead to 20% more likes and 15% more conversations for those who have it on their profiles. The idea may sound silly, but Game of Thrones has over 2 million mentions on OkCupid profiles. Shared interests are, if not a predictor of deep compatibility, then at least a good conversation starter. Television is something singles want to connect over.

But the profile badge isn’t just a way to announce your love for the show. Previous badges have helped users’ declare their values and beliefs, which are undeniably central to determining whether two people will be compatible over the long haul. OkCupid’s previous forays into branded badges include 2018’s #RightToLove badge in partnership with the ACLU and 2017’s #IStandWithPP in support of Planned Parenthood. These shortcuts help singles indicate what is important to them and connect with other users who share their values.

According to OkCupid, your thoughts on Game of Thrones may reveal more about you than your taste in TV. The dating platform posed a series of Game of Thrones-related prompts in its questions section, then cross-referenced users’ answers with other information from their profiles. Over 300,000 users responded. OkCupid discovered trends:

OkCupid analyzed these trends for insights. They found that users who name Brienne and Tormund as their #relationshipgoals are more likely to challenge traditional gender roles in their real-life relationships. Fans of Khal Drogo and Daenerys, on the other hand, are less likely to want to challenge gender roles in dating. They’re also more likely to say they’re looking for one-night stands or flings. If you’re looking for life-long love, your best bet is to find someone who considers Ned and Catelyn Stark their ultimate relationship goals.

OkCupid’s Game of Thrones profile badge is available now until June. You might not find romance worthy of a fantasy epic, but you might connect with someone to share your sorrow when your favorite character is finally killed off.

As far as recent statistics go, according to OkCupid's About page, they currently have 56 employees. From people using the service, 50 thousand dates happen every week, and 91 million connections are made every year. OkCupid appears to be very popular in New York city, as the app is the most mentioned service in the New York Times wedding section. As far as the number of users OkCupid has, this is a tricky question since they have released no recent numbers. As of 2012 they reported 10 million users. Since then dating apps have become very popular. Google Play reports 10+ million (the next increment is 50 million) OkCupid app installs on Android. Apple doesn't report installs but I can think we can safely assume that they would be about equal. This means a conservative estimate for the number of users OkCupid has since they launched would be about 50 million or so. To find out more on this dating service, you can read our OkCupid review.