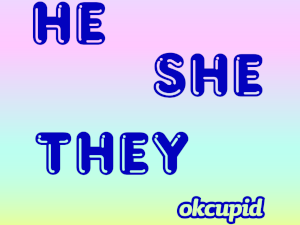 OkCupid announced that it has rolled out a new feature to allow users to prominently display their pronoun preferences in their profiles. This is an important step for the industry as a whole in acknowledging and including people who identify outside of traditional binary male/ female gender roles.

OkCupid users have had the option to include pronoun preference information in their bio (or “self summaries” section), so potential dates know how they identify. This wasn’t optimal for many daters, since not every potential match takes the time to read through a profile. Making it a feature and giving it a dedicated space allows users who identify outside of traditional gender norms more inclusivity in the online dating experience.

The company partnered with LGBTQ+ advocacy group GLAAD to help with launching the new feature for users, and to educate them about the new option. Currently, it allows users to choose between 3 options: she/her, he/him, and they/them. (for those who prefer gender-neutral Ze/Zir, this is not an option right now.) In addition, users have been able to choose between 22 gender and 13 sexual orientation preferences. The pronoun feature was rolled out this week.

“Everyone should be able to express who they are, in their own words, and to have the opportunity to find romance with someone who respects and appreciates them,” Zeke Stokes, vice president of programs at GLAAD, told Refinery 29[*1] .

The new feature was designed by Rowan Rosenthal (who uses they/them pronouns) during OkCupid’s hack week this year, according to website The Verge. According to Rosenthal, the idea came about because of many awkward dates where they were referred to as “she,” which made them uncomfortable. Making pronoun preferences a choice from sign up “legitimizes the preference and makes it an important part of the dating experience,” according to The Verge.

Rosenthal said they couldn’t fault their dates, because dating apps hadn’t really offered a way to share this information up front. Prior to OkCupid’s announcement, Grindr had been the only app to offer pronoun options.

While users are able to identify and share their pronoun preferences, they aren’t able to filter their search in this way – the feature is only an identifier for now. However, matches can still filter searches by gender identity and sexual orientation if they choose.

"At the end of day [OkCupid] wants to facilitate really great connections," said Melissa Hobley, chief marketing officer of OkCupid, according to Refinery 29. "And those connections start from a place of celebrating who you are." For more on this dating service, check out our OkCupid review.