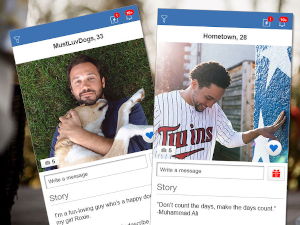 Dating app users find those who have typos and grammatical errors in their profiles to be less attractive, according to a new study[*1] published in the Journal of Social and Personal Relationships.

Interestingly, only 33.5 percent of participants noticed the errors and called attention to them, so most participants didn’t catch the mistakes. But those who did notice rated the grammatically incorrect profiles as less attractive than those profiles without errors.

“Apparently, most people do not observe language errors in online dating profiles, but for those who do, the errors severely damage the profile owner’s dating potential,” said lead researcher and author Tess van der Zanden, PhD student at the Department of Communication and Cognition of Tilburg University.

The new study was inspired by OkCupid’s blog post from a few years back, where the company surveyed their users and found that 75 percent were turned off by profiles that had spelling errors, and were less inclined to respond to these matches. Researchers wanted to better understand the link between profiles with errors and their overall impression with dating app users.

A second study by the same research group also pointed out that people associate different kinds of typos with different personality attributes. Researchers interviewed 365 Dutch adults and compared accidental language errors on dating profiles such as writing “teh” instead of “the” to grammatical errors, such as writing “me” instead of “I.” They found that simple spelling errors were perceived by respondents as a sign of inattentiveness, while grammatical errors were seen as a sign of lower intelligence. However, both types of errors were linked to lower attraction scores.

When people used informal language in their dating profiles, such as emoticons, abbreviations, and even exaggerated punctuation, the researchers found that this also turned people off. Respondents viewed it as a sign of “reduced interpersonal warmth.”

Though the majority of respondents didn’t notice the errors, for those who did, it made a difference. Researchers argue that this is a reason to double-check your profiles for grammatical and spelling errors, and to keep emoticons and other language shortcuts to a minimum to attract a greater number of matches.

“Even though we found that a lot of people did not notice or did not know whether they had been presented with profiles with language errors, you just want to prevent people from attributing you false personality traits (e.g. that you are lacking intelligence or that you are not attentive), and that your profile is therefore immediately discarded just because of some language errors….people have only limited information on a dating profile to form a quick initial impression on and to decide whether there is interest in pursuing contact with the profile owner or not. All small pieces of information that are available can thus influence the impression others form of you,” said van der Zanden.