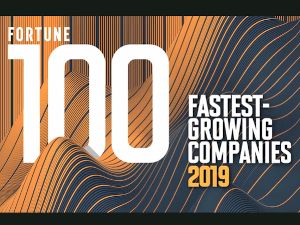 Momo ended 2018 on a mixed note. In the good column: revenue jumped 51 percent in the third quarter of the year and net income rose nearly 8 percent year-over-year. In the bad column: news broke that 30 million Momo users may have been affected by a data leak.

If there was any doubt then which column would win in the end, it’s long gone now. Momo is back on its feet and recently scored the coveted number one spot on Fortune’s 2019 list of Fastest-Growing Companies in the world. It’s the Chinese dating app’s first appearance on the annual top 100 list.

To be considered for the ranking, companies must trade on a U.S. stock exchange and have a market cap of at least $250 million. Those that qualify are evaluated by revenue growth rate, earnings-per-share growth rate, and three-year annualized return to determine their place in the list. Historically, major players in the tech industry have dominated the line-up.

Fortune shared the following stats that secured the top spot for Momo:

Momo’s valuation currently sits at just over $7 billion. The company’s price on the NASDAQ has grown by 27% since the end of May, and the release of its Q1 2019 financial results revealed a 35% net revenues increase year-on-year to $554.7 million.

In the remainder of 2019, Momo will look to grow revenue further with the recent launch of a new incubated app, Qiao Qiao. Qiao Qiao, which translates to “Quietly” in English, aims to reduce the superficiality of online dating by blurring profile pictures. The images gradually increase in clarity as users continue their conversations and deepen their connections.