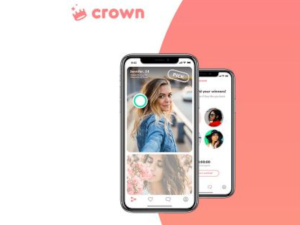 It works like this: every day at noon, users are presented with sixteen total profiles, shown two at a time, and must choose only one “winner” from each group of two. Users go through a process of elimination, until you end up with the final four matches, at which point you choose one final winner to be “crowned.” That winner is then alerted he/she has won, but that doesn’t mean you start chatting right away - it’s up to the winner to choose whether or not he/she wants to message you.

The game element is an interesting choice by Match Group. By turning it into a process where there is a possibility to “win,” the idea is that more users would feel invested in the process, and therefore be more likely to reach out. On the other hand, some argue, users might feel more acute rejection if their “winners” choose not to interact.

According to website TechCrunch[*1] , Crown was developed as a response to swiping fatigue and information overload, a complaint expressed by many online daters. According to Match Group’s own research and its Biological Anthropologist and consultant Helen Fisher, people on dating apps feel compelled to keep searching to find someone “better,” even after they find someone interesting to pursue, which means that more and more people are getting tired and disillusioned with online dating in general.

Another complaint from online daters is the lack of follow-through from their matches. Many people swipe right, but then they do not message or grow silent before they meet someone in person.

Patricia Parker, Product Manager for Match Group, came up with the idea for Crown. It was developed by a group of Match employees who are also millennial women, to give it a more female-friendly focus according to TechCrunch. How it will be received by female daters and whether or not it will take off is yet to be determined, but it seems the developers had the popular reality TV show “The Bachelorette” in mind.

“It’s like a ‘Bachelorette’-style process of elimination that helps users choose between quality over quantity,” Andy Chen, Vice President of Match Group told TechCrunch. “Research shows that the human brain can only track a set number of relationships…and technology has not helped us increase this limit.”

Crown has been tested in beta for the past few months, but recently launched in L.A. So far, Match Group says it’s “organically growing” with several thousand users.

Currently it is available only on iOS.