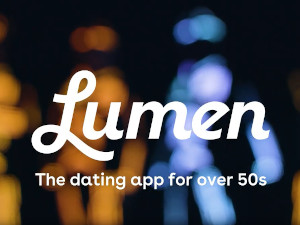 Dating app Lumen is coming out strong for the over 50 online dating market. It has already achieved one million downloads in just eight months (Android and iOS). In June, the company announced the launch of an international campaign dubbed “50 is just the start,” partnering with over-50 dance group The Silver Classix Crew in its ads.

The dance group performs in costumes that hide their identities, so they could be mistaken for much younger dancers. The end of the ad has them removing their masks to reveal performers with gray hair and other signs of age, meant to make viewers question their preconceptions of what “older” means. The ad will air in various global markets on both broadcast and digital platforms like Comcast and Hulu, according to website Campaign US.

"Fifty is a very different age now to twenty years ago. With all of Lumen's adverts, we try to showcase a modern, realistic view of what it means to be over 50, rather than preconceived notions of retirement and 'old age,’" said Charly Lester, CMO and co-founder of Lumen told Campaign[*1] in an interview.

The ad is an interesting appeal to a typically ignored segment of the dating app market, and one with presumably more money than their younger counterparts. Popular apps like Tinder, Bumble and OkCupid often focus on younger users since they are the preferred demographic and adopt to new technology easily, but Lumen begs to differ. The app has had over one million downloads since its launch eight months ago.

The UK-based app launched last year as an alternative for older daters who have felt unwelcome in the dating app scene. Lumen emphasizes its focus on security, an important selling point. Currently, it is the only dating app to require users to take a selfie when they sign in to verify their identity.

Lumen also puts restrictions on messaging so people don’t get spammed. Users are allowed to send up to three messages per day, and recipients have only 72 hours to respond or the message chain disappears. There is also a minimum character length for introductory messages, and three photos are required in setting up a profile.

Lester told Yahoo! Finance that her goal is to make women over 50 feel more comfortable using a dating app, considering the attention given to millennials by other apps. By providing a platform of similarly aged singles, the over 50 demographic can enjoy more choice and hopefully have a better online dating experience.

As Lumen has shown, there is ageism in online dating, and the app is feeding a demand for a more inclusive dating experience.