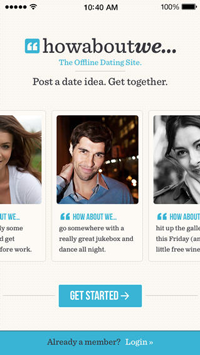 HowAboutWe is about to take over the world - literally.

The dating service has announced the launch of the first internationalized versions of its iOS application. Though the web-based version of HowAboutWe already had international users, the app was only available in English, significantly limiting its reach. Now it's available in 15 new languages that cover more than 30 countries, including France, Russia, and Japan.

And it gets even better. The company says it's also making all features in the mobile application available for free to international users. (Sorry, America, you still have to pay. Premium features for United States-based users, like unlimited membership, will continue to cost between $8 and $35 per month.) In addition to full access to all of the exclusive features offered to American HowAboutWe members, global users will also enjoy:

When asked why the company was choosing to offer services entirely for free, HowAboutWe's head of PR, Jade Clark, explained that their primary concern is to extend their reach as a brand and become an established figure in a new market before weighing monetization options.

HowAboutWe isn't just planning to bring its emphasis on real-world activities to the international stage. Half a million members are signed up for HowAboutWe for Couples. When asked about mobile and international plans for the couple's product, Clark adds that the company is working to expand their mobile offerings and plans to make some major announcements in the early parts of 2014.

To celebrate the launch of the app around the world, co-founder and co-CEO Aaron Schildkrout posted a guide to his blog called "10 Things You Need To Know Before Internationalizing Your App." I'll spare you the details, because many of them are quite technical, but Schildkrout did speak of the challenges that come from language barriers and different cultural expectations. His final piece of advice is something we can all understand, regardless of your location: "It will always take 3x longer than you think!"

I'm intrigued by this new development. Just think of all the opportunities for cross-cultural connections that might now be possible. Imagine being an American tourist in a foreign land, connecting with locals (and possible tour guides) using the same dating app you're already familiar with. It could add a whole new dimension to travel.

For more on this service you can read our HowAboutWe review