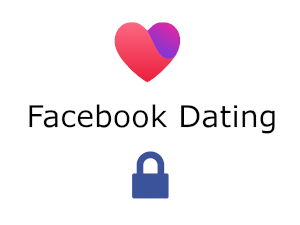 Facebook Dating is reassuring potential customers by allowing them to make decisions about how visible they want to be on the app – including providing features to block certain users from appearing in your matches (like an ex) and hiding your dating profile from friends and work colleagues. Even some of the more questionable features – like “secret crush” – where you can identify someone you secretly like over the app, and if they do the same you two are matched, are only activated when users choose them.

Still, there is reason to be concerned. According to a recent article in International Business Times[*1] , the real privacy concern is its integration with Instagram, also owned by Facebook, because daters can add their Instagram feed to Facebook Dating. This allows the social media giant to track users across apps and collect more data about preferences, locations (including what events you’re attending), and social circles, giving it more valuable insight into its userbase.

Facebook has been under fire recently for its privacy practices and the way it collects and uses personal data, including selling information to preferred companies willing to pay for it.

As the San Francisco Chronicle pointed out, Facebook’s user base is shrinking in the U.S. as younger people gravitate to other social media platforms like Instagram. It makes sense that Facebook has integrated the service into its dating app to attract new younger users. However, this move also allows Facebook new opportunities to gather data in both of the platforms (including cross-use of posts and stories), which comes in handy to get a leg-up in the billion-dollar dating industry.

Match Group is by far the biggest player in the dating app industry and Facebook’s main competitor, with star apps like Tinder, OkCupid, Hinge and Plenty of Fish on its roster. And while Match Group is spending a lot of time and money differentiating its apps – Tinder for younger, casual dating as opposed to Hinge for the more serious young professionals – Facebook Dating’s audience is still ambiguous at this point.

Facebook Dating has touted its ability to create better matches that lead to lasting relationships, an attempt to appeal to older users looking for an alternative to the hook-up culture of traditional dating apps like Tinder. However, adding Instagram to the mix is an indication that it also intends to go head-to-head with Tinder.