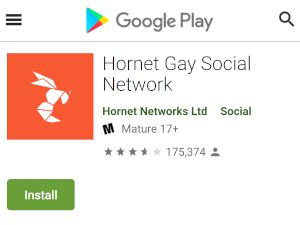 Hornet has accused Google of discrimination after its app was removed from the Google Play store several times with no explanation. The gay dating app’s CEO, Christof Wittig, expressed concern that Google’s moderators in Malaysia were blocking Hornet because same-sex relationships are illegal in their contry.

Founded in 2011, Hornet has become a popular gay social network with over 25 million users globally. Hornet’s success has propelled it to the top of the market for gay apps in countries as diverse as France, Russia, Brazil, Turkey and Taiwan. The company has also been hard at work expanding its user base in the United States.

Wittig called the repeated bans of Hornet from Google Play "selective enforcement" against LGBTQ-focused apps. He also said Hornet had been excluded from earning advertising revenue because it publishes LGBTQ-focused content, and suggested that using keywords like "gay" and "homosexual" in articles "triggered algorithmic flagging."

A rival gay dating app that remained anonymous told the BBC that it, too, had been blocked globally by Google moderators based in Malaysia. In one example reported on by the BBC[*1] , a moderator that appeared to be located in Malaysia suspended Hornet from Google Play after finding a photo of a shirtless man on the app. The image was not reported to Hornet through its internal moderation tools, nor did it appear to be in violation of any of Google’s sexual content guidelines.

The gay dating app Scruff has faced similar issues. After experiencing several bans from Google Play, the app introduced stricter rules for profile photos in January of this year. Scruff users are no longer allowed to use profile images that feature men in underwear or swimwear.

In addition to these accusations of bias, Google is currently being sued by a group of YouTubers for discrimination against LGBTQ creators. The lawsuit alleges that Google limits the reach of LGBTQ-themed videos, removes advertising from videos featuring terms like “gay” and “lesbian”, does not do enough to filter hate speech in comments, and labels LGBTQ videos as “sensitive” or “mature.”

“There’s a bunch of ways that YouTube is discriminating against us,” Vancouver creator Bria Cam told B&T[*2] . “YouTube is removing our thumbnails. They are not sending our video out to subscribers. They are unsubscribing people. If you search our names, certain videos just don’t appear.”

Google denied any discrimination against LGBTQ video makers, issuing a statement that said the company’s policies have “no notion of sexual orientation or gender identity.” Google has not commented on Hornet or any other dating app accusing the company of bias against the LGBTQ community.