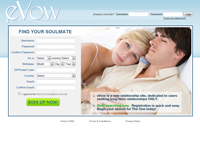 Almost 5 years ago Plenty of Fish Media launched eVow, and as of April 17 we were informed that the dating service appears to have been closed. The dating apps have been removed from iTunes and Google Play, and the website now redirects to POF.com. Plenty of Fish Media has not release an official statement about these changes but with the service now being completely inaccessible I think it is safe to assume that it has been shut down.

eVow was design to compete with dating sites that specialized in long-term relationships (like eHarmony). With the advertisement might of POF behind it in the beginning eVow quickly grew and was a popular choice for singles. Unfortunately after 5 years and intense completion in the dating sector eVow was not able to sustain itself without relying on the free advertising it received on the Plenty of Fish dating site. eVow must not have been making enough money through memberships and advertisements to justify the cost of taking up advertisement spots on POF (which other advertisers would pay money for).

I think one of the problems eVow ran into is that it also competed with their sister service POF.com. While POF doesn't cater to only long-term relationships, it does have the Chemistry Predictor matchmaking system which does attempt to match single together based on personality types to which is a key ingredient in long term relationships. A lot of members of POF looking for long-term relationships obviously didn't feel the need to move to eVow since POF was meeting their needs.

It's too bad eVow had to close down. The dating service had a lot of good ideas. Unfortunately the dating industry is intensely competitive and most dating services will not survive more than a few years.