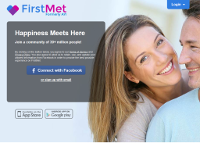 Are You Interested (AYI), the first online dating service to utilize Facebook connections in its matchmaking process by pairing friends of friends in the same social media circles, has announced that it has rebranded its AYI app and website.

The new service is called FirstMet, which parent company Snap Interactive says “reflects the company’s vision for making it easier for single adults to meet new people in a friendly, low-pressure environment.” At first glance, the design of FirstMet is similar, and the app still uses Facebook as a connection tool. However, the experience is specifically designed for mobile users, as opposed to AYI’s online service.

AYI launched in 2007, and has since gained about 30 million users worldwide. While the app attracted a nice user base, rivals like Tinder and the traditional dating sites like Match still cornered the market for attracting new and more active users.

The main changes to the rebranded app were technology enhancements, rather than features or design. FirstMet has included IceBreakers in its rebrand, a popular AYI feature that allowed members to connect with each other more easily. The new app has also unlocked messages to matches, making it possible to send the first message to a match for free.

The app is also rebuilt with a streamlined back-end infrastructure, allowing for better performance as well as more frequent updates to address user requests.

SNAP Interactive initiated the rebrand because it noticed a number of unengaged users. The company’s first priority is attracting them back to the app. SNAP’s CEO, Alex Harrington, said in a statement, “we needed a stronger brand identity to communicate those benefits effectively to new and existing users.”

To entice these users as part of the branding effort, FirstMet intends to offer free trials of the product and “open house” dates, during which new and existing users can have the benefits of premium features at no cost. They are also leaving the millenials and hook-up driven users to Tinder, focusing instead on more serious daters.

“The rebranding affirmatively targets an underserved niche in the market, adults 35 years and older,” said Harrington. “With much of the industry attention and innovation focused on hook-up apps and the millennial generation, FirstMet fills an important void in helping single adults seeking new relationships, while minimizing the effort and stress of getting back in the dating game.”

While the app is primarily for mobile users, it is accessible on five desktop and mobile platforms. iPhone and Android apps are free to download.

To find out more about the rebrand Are you Interested, please read our FirstMet review.