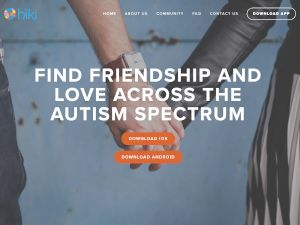 New dating app Hiki launched this month, and it is the first of its kind to cater specifically to the Autistic community.

Founder Jamil Karriem was inspired to create the app with help from his cousin with Autism, who expressed his loneliness and fear that he wouldn’t be able to find someone special. Karriem decided that he wanted to create a safe digital space that would allow those with special needs to connect, whether for friendship or dating. The word “hiki” itself means “able” in Hawaiian.

Karriem told Yahoo! Finance[*1] that he didn’t want to limit the app just to dating, but that often people in the Autistic community are interested in finding new friends, too. The Hiki app allows users to swipe left or right, depending upon what it is they’re looking for — friendship or romance.

Hiki restricts its community to those 18 and older on the Autism spectrum. The app was developed in partnership with people with Autism, including the design team which included one neurotypical and one person with Autism. Karriem also holds weekly “feedback sessions” with his five-person advisory team that includes both people with Autism and educators with vast experience working with this community.

Dating apps in general can be challenging for those on the Autism spectrum. Miscommunication and misunderstandings are commonplace on these apps, and for those with special needs, they pose another layer of challenges as they seek to connect. Not to mention, typical meeting places for dates like bars or restaurants are not conducive to those who have sensory processing issues, as Hiki’s release points out.

“The mobile app provides a safe space for people with Autism to embrace their uniqueness and celebrate their commonality,” the company said in its press release[*2] . “It is a place where being different is destigmatized, and where friendships, love, and a sense of community can flourish.”

Autism is on the rise in the U.S. Seventy million people currently live with the disability, and one in 59 children in the U.S. are born with it. Advocacy organization Autism Speaks defines the disorder as "a broad range of conditions characterized by challenges with social skills, repetitive behaviors, speech and nonverbal communication."

"There are a myriad of dating and social platforms for nearly every identifiable group, but nothing for the large, often overlooked Autistic community,” said Karriem in the release. “I created Hiki because I believe that friendship, love, and community are the essence of happiness, and that everyone deserves access to platforms that can help build meaningful relationships."