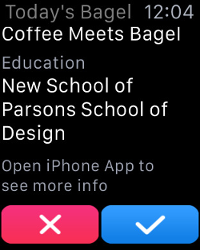 Apple Watch sales have been through the roof since the product launched, and it is creating a media frenzy (as many of Apple’s product debuts do).

Not many dating apps can be downloaded for the Apple Watch, but Coffee Meets Bagel is one of the first. The company recently announced its launch on Apple’s wearable technology.

Coffee Meets Bagel is a dating app that works through your social media connections, finding matches in your Facebook network and introducing them to you one at a time. At noon every day, CMB presents users with one personalized match or “bagel” – then each user has 24 hours to decide to like or pass. If there’s a mutual like, they can chat over a safe and private line. However, messaging is not indefinite – users will have only a week to set up a date before the private chat line closes.

With Apple Watch, CMB works a little differently. This might signal a new wave of dating technology, since swiping left and right isn’t really an option with an Apple Watch. (Sorry, Tinder.) Instead, apps rely on more hands-free technology, such as voice-to-text functionality.

According to Dawoon Kang, co-founder of the dating app, the Apple Watch app will complement the existing mobile app by "enabling members to do everything more quickly and easily," not to mention hands-free. Apple Watch’s Glance feature allows members to check their daily matches at noon. The watch will display the match’s basic profile and photos – (likely not much information will be available on the small screen, however).

Instead of manually liking or passing, members can “like” or “pass” matches hands-free using the Apple Watch’s voice technology. If two users match, then they are connected and able to chat using voice-to-text technology.

This is good news for those looking for a Tinder alternative. But is wearable technology going to be a new platform for dating apps? Considering CMB works through voice technology (i.e., talking to your Apple Watch) – it might be a little intimidating to use when you’re out at a bar. Do you really want people around you to know that you’re liking or passing on a date, or to overhear your text conversation? Tinder is much more subtle, and no voices needed.

Still, that isn't stopping people from buying the new watch. No word yet on whether CMB's dating app will also be available for wearable Android products.