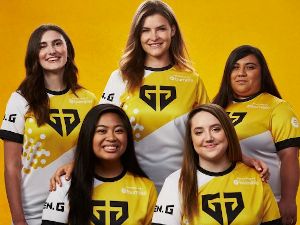 Bumble announced its most recent partnership with Gen. G to create the first all-female team of professional Fortnite players.

According to CNBC[*1] , the female-friendly dating app will also become the official partner for Kristen Valnicek (a.k.a. KittyPlays), a content creator and Twitch player who is head of new gaming initiatives for Gen. G, a global esports organization that was originally founded in South Korea.

“Bumble is in the unique position of providing value to an entire generation of gamers, encouraging them to strive for their goals and facilitating ways to connect them [in real life],” said Valnicek in a statement. “The future is bright, and I can’t wait to see the impact we make together!”

The purpose of the partnership is to elevate women gamers, especially in esports or competitive gaming where men have dominated.

According to the Entertainment Software Association, 46% of the 166 million adults in the U.S. who play video games are women, up from 45% in 2018. But often, they are overlooked or even harassed when it comes to participating in gaming communities. Because the video game culture has traditionally been centered around male players, and because female players have experienced such a lack of support and criticism, many women don’t even like to identify as “gamers.” Bumble is hoping to empower women to reach out to each other and form their own connections with people who share a love of video games, without feeling stigmatized.

According to CNBC, Chelsea Maclin, Bumble’s VP of Marketing said that the company noticed female gamers reaching out to each other over Bumble BFF, their friend-connecting platform, in order to find other female players. They noticed a need that wasn’t being met in the gaming community.

“I think we can help esports grow by making it easier for gamers to find and build meaningful relationships with other players in their neighborhood,” she said.

Gen. G CEO Chris Park saw the opportunity that was being missed and looks forward to the partnership with Bumble. “…this generation of gamers is not only bigger today than most people realize, but is going to grow to larger proportions than people realize,” he said in an interview. “A critical element of that is giving voice to the big segments of the community that are emerging and have a real significant place on streaming platforms, tournaments and casual fans.”

Bumble recently launched a new in-app video call feature on its platform, which the company intends to capitalize on with its new partnership, especially with the gaming community growing so rapidly. “One idea is to have [Valnicek] connect with other gamer girls through video calls on Bumble BFF as part of our ‘Asking for a Friend’ program,” Maclin told CNBC.

There’s a long way to go in bridging the gender gap in esports, but Bumble – in its trademark way - is making the first move.