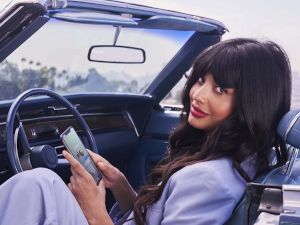 The #askingforafriend campaign launches August 4th in honor of International Friendship Day, and will focus on encouraging Bumble users to build friendships to counter the growing problem of loneliness around the world. According to studies, social media is part of the problem, with one in five people saying browsing through their feeds makes them feel lonely.

Bumble BFF provides the platform for users looking to connect and build friendships without having to rely on existing work and family contacts. According to Harper’s Bazaar, “the partnership [between Bumble and Jamil] hopes to champion women to feel more confident in themselves and help them to build a strong network of their own.”

Jamil is an outspoken advocate of women, particularly when it comes to body shaming and the media. With over 800,000 followers on Instagram thanks to her “I Weigh” initiative, she encourages self-acceptance and self-love, as well as advocating for unretouched photos in advertising and the media. She also shared in a post that she has struggled with feelings of loneliness and isolation. "I'm someone who has really struggled with it [loneliness] in my life, because I've always moved around a lot, because I've always been socially awkward, and just because sometimes it's hard to find your people.”

Jamil’s participation in the campaign was announced after her interview with British Vogue (which was edited by special guest Meghan Markle), as part of the September issue’s theme “Forces of Change.” She joins stars like Serena Williams and Kasey Musgraves as Bumble’s newest brand ambassador.

"This campaign really spoke to me, especially when I saw the numbers of women around the world who felt isolated or without support," Jamil said in a statement. "I've spent much of my adult life fighting for the rights of everyone to feel confident and comfortable in their own skin, which is how I was able to start my own movement called I Weigh to champion inclusivity. I realized that with a supportive group of friends around you, anything is possible."

The pressure of social media is real. Studies have linked the use of social media to depression and anxiety, not to mention poor sleep quality, lower self-esteem and hyperactivity, particularly with vulnerable groups like teens and adolescents.

Part of Bumble’s campaign is to encourage people to use their time online wisely, and to spend more time building real-life connections for better mental health and quality of life.