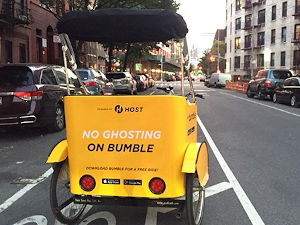 Bumble is fighting ghosting once again – this time with a marketing campaign whose launch coincides with Halloween.

“Ghosting” is a dating term that refers to two people who have been messaging or seeing each other, and one suddenly stops texting or returning calls, leaving their date to wonder what happened and why they “disappeared.”

The tie-in with Halloween is clever but ghosting itself can be very painful for those on the receiving end. Many daters have experience with ghosting and know how it can ruin the dating experience to be left in the dark. When someone is ghosted, it’s easy to assign blame and make up stories as to what happened, or worse – they can lose confidence as they consider how they might have fallen short - which is counter-productive to finding the right person.

According to website Bustle[*1] , Bumble has hired in-house ghosting expert Kate Leaver (yes, you read that correctly), who will be posting ideas for users on what to say as an alternative to just ghosting someone. Her directive is to encourage conversations among users so they speak up instead of going silent. One tactic of the campaign is offering options of how to bring up the subject instead of backing out of difficult conversations, like telling someone you aren’t interested. Instead you could say: “Hey, it was nice hanging out with you. You’re great, but I’m not feeling a romantic connection. If you want to try being friends later, I’d love to be in touch.”

Being so honest with someone you hardly know seems unnecessarily hurtful to some, but to those on the receiving end, it can often feel like a relief to know where they stand.

Bumble surveyed their users in the UK and Ireland before launching the campaign, and received 32,355 responses. They found that 69 percent of Bumble users admit they would text someone after a first date to let them down if they weren’t interested. This contrasts with people actually doing that – 89 percent said they’d prefer to know why someone didn’t want to see them after a first date. Another 62 percent said they’d like advice on how to break it off with someone, which is where Bumble’s campaign enters the picture.

Leaver said in a statement: "the simplest way to avoid ghosting is to always provide an explanation if you’re going to cease contact with someone romantically. On dating apps, chats often fizzle out naturally and that’s OK. But if you’re deliberately calling an end to an interaction you owe them the courtesy of a goodbye."