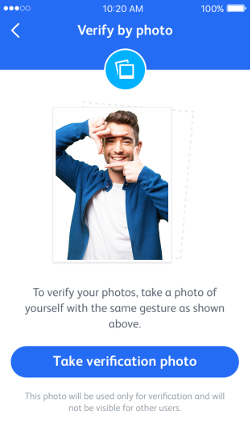 How do you know if that cute guy you matched with on your dating app is really who he says he is? The hard truth is – you don’t, at least until you meet in person.

One consistent issue with online dating (and social media in general) has been users setting up fake profiles. Often, these fake profiles are used for catfishing – or targeting and scamming other users or members of the same service. Online dating site Badoo has decided to address the problem with its own newly-launched photo and profile verification system.

Many online daters in the U.S. have heard of OkCupid or Tinder, but they haven’t heard of Badoo. Despite this, it is a global giant in the online dating industry with 300 million registered users in over 190 countries, bigger than all of the popular U.S. dating services – even Tinder. Plus, the company has 400,000 signups every day, mostly in Europe and South America.

According to Badoo, the new verification system will hopefully eliminate catfishing from the service altogether. When a new user signs up, they are asked to verify their profile. Badoo then sends them a request for a photo – and the new user has to perform a specific gesture that Badoo assigns. (The company notes that it is a unique and specific gesture, not a common one like a “thumbs-up.”) Badoo will then make sure it's you by looking at the other photos on your profile along with the unique pose. You may even be asked to do another pose. The whole process takes less than a minute since the company has 5,000 moderators worldwide checking them out, so it’s pretty efficient.

If a user chooses not to verify a photo, they could be excluded from other users’ views who only want to connect with verified profiles.

The new verification system is another step in Badoo’s strategy to appeal to female online daters. With the verification system, Badoo intends for female daters to feel more secure in signing up and using the service, since they are often the ones who are targeted with fake profiles and messages.

This seems to be a strategic move. The company recently bought popular female-centric dating app Lulu, where women rate the men they date for other women, as a referral or warning system, depending on how you look at it. Badoo’s head Andrey Andreev hired Lulu’s founder Alexandra Chong as President of Badoo, and the company intends to set up a U.S. office to attract more of a presence in the States. According to TechCrunch Andreev also has invested in Bumble, another female-friendly dating app.

The new version of Badoo is available in the iTunes store, Google Play, and the Windows store.